In Stuttgart, the Rosenstein Tunnel is still under construction. In the future, the B10 will run underground in two 1300m long, two-lane tunnel tubes between the Rosenstein Park and the Wilhelma Botanical-Zoological Garden. The Rosenstein tunnel is expected to significantly improve traffic flow in the Pragstrasse / Neckertalstrasse area. The tunnel tubes are scheduled to go into operation in mid-2021.  The contract for the construction work was awarded to the B10 Rosenstein Tunnel consortium consisting of Marti Tunnelbau AG, Marti Deutschland GmbH and Wolff & Müller Spezialbau GmbH & Co. KG
The parallel tunnel tubes are connected to the existing roads via ramp structures, which were constructed using the cut-and-cover method. This is followed by a 735m long mined tunnel section. Four cross passages connect the individual directions of travel in this section. In the middle of each tunnel tube there is an approx. 55m long breakdown bay.
Concrete compaction for the tunnel floor and cross passages was carried out with a vibrating screed and external vibrators from Mooser Schwingungstechnik, a company based in Puchheim near Munich. Mooser Schwingungstechnik has been a reliable partner in the field of vibration technology and concrete compaction for over 45 years. Depending on the application, the formwork and the concrete consistency, vibrator positions, vibration times and the sequence of vibrator activation are planned individually for each customer.
To construct the inverts of the main tunnel, Mooser Schwingungstechnik supplied a profile vibratory screed that was specially designed to meet the customer's requirements and precisely fit the tunnel geometry, and was suspended in the invert formwork carriage. These patented profile vibrating screeds are vibration-damped at certain points in order to keep the energy of the vibrators away from adjacent components, such as the running wheels or running rails of the invert formwork carriage, and to prevent damage such as concrete cracks in the invert-wall transition. This eliminates the need for costly and time-consuming repair work.
The powerful VR 56 compressed air external vibrators from Mooser Schwingungstechnik were used in all crosscuts and transition areas of the main tunnel as well as in the widening area for the breakdown bay. Thanks to their small and compact size, the pneumatic vibrators were mounted directly on the forming cleats of the special timber formwork. This meant that they were mounted in the immediate vicinity of the formlining and were able to transfer the vibration energy to the concrete without any losses. Central air control units ensured that the frequency, centrifugal force and thus the power of the vibrators could be centrally adjusted and controlled as required.
Another advantage is the start-up characteristic of the VR56 air vibrators. They reach their rated speed immediately after the air supply is switched on. The natural frequency range of the formwork is passed through abruptly, thus minimizing the risk of damage to the formwork.
Fully satisfactory depth compaction and very good surface quality of the concrete were achieved, even in the expansion areas of the crosscuts. Mooser Schwingungstechnik will of course be represented again with its products at the follow-up projects, e.g. ARGE Tunnel Cannstatt S21 in Stuttgart. 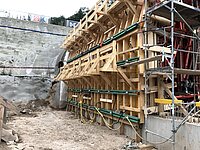 For the concrete compaction of the tunnel inner lining, Alfred Kunz decided to use Mooser external vibrators® of the VR56 type. These Mooser…

In Munich, a high-quality exposed concrete facade was constructed for a residential and commercial building. The VR56K compressed air Mooser®… 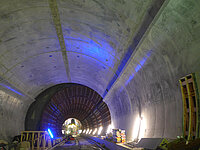 To create the inverts of the main tunnel, Mooser Schwingungstechnik supplied a profiled vibrating screed that was specially designed to meet the… 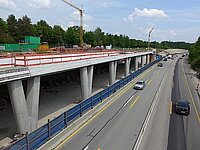 In the course of the current widening of the A 96 freeway to three lanes + hard shoulder, it became necessary to implement suitable noise abatement…

We use cookies to make it easier to use and to further improve our service.